On the 19th of August 2008, after an heroic fight bravely and joyfully managed till the last moment, our beloved mate Marina Genovese passed away.

Her premature death represents for us ...


See all the programme on our NEW WEB SITE! 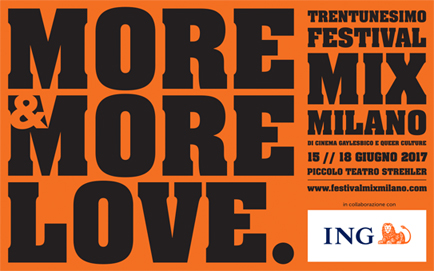 
Milano Women's House: Sunday, the 14th of October in Milano at 5.00 p.m., IMMAGINARIA presents "Kurdistan, la guerre des filles" di Mylène Sauloy (52', France, 2016), the wonderful documentary describings the Rojava revolution made by the female army against the atrocities committed by Daesh and the Turkish army. A social-feminist revolution which would like to change social and female conditions in all the world.


A step in Florence, hosted by Azione Gay e Lesbica on Monday the 13th of June. The wonderful scenario of the "Limonaia di Villa Strozzi", in the center of Florence, will host IMMAGINARIA  at the forst edition of the Toscana Pride Park, a great success in 2015, special mention as best fiction at the 29th Edition of Festival MIX MIlano: "Anita's Last Cha Cha" by Sigrid Andrea Bernardo (Phylippines, 2013, 111').


Friday, the 16th of October in Milano the  Immaginaria staff is waiting for you at CINEMA MEXICO in via Savona 57 to take part in an incredible  journey in the lesbian and feminist movie production.
Download or view the programming or have a look to the whole event programming at the web-site of the festival Lesbians outhall. 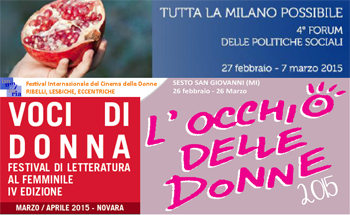 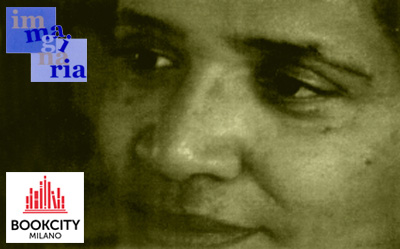 Margherita Giacobino and Maria Nadotti will debate on the book "Sorella Outsider. Gli scritti politici di Audre Lorde", Il dito e la luna 2014. During the event the documentary "The edge of each other's battle" by the US director Jennifer Abod will be screened. The film is provided and subtitled by IMMAGINARIA.

IMMAGINARIA @ MILANO with the LESBIANS OUTHALL

Here we are for the FOURTH edition of the LESBIANS OUTHALL  FESTIVAL in MILANO from 27th of September to the 5th of October 2014 (complete schedule on  http://www.lesbichefuorisalone.it or on FACEBOOK) IMMAGINARIA presents a fantastic film selection chosen between the best 2012-2014 lesbian independent films production.


Take part into the book presentation: «Sorella Outsider: scritti politici di Audre Lorde» (ed. Il dito e la luna) where Nicoletta Buonapace will interview Margherita Giacobino who, in collaboration with Marta Giannello Guida, has translated the first Italian edition of Audre Lorde's assays.
The event will be closed by the documentay screening "The Edge of Each Other's Battles: The Vision of Audre Lorde“ by Jennifer Abod, 2002, USA, 60 min.

IMMAGINARIA @ ROME with the LESBIANS OUTHALL

After the great success of the events in Milano, the LESBIANS OUTHALL  come to ROME from 31st of May to the 7th of June 2014 (complete schedule on  http://www.lesbichefuorisalone.it or https://www.facebook.com/FuoriSaloneDelleLesbiche) Just on the opening day, IMMAGINARIA presents the film selection chosen between the best 2012-2014 lesbian independent films production.

IMMAGINARIA in MILANO at the third edition of the LESBIANS OUTHALL

At the LESBIAN OUTHALL this year IMMAGINARIA presents documentaries, features and shorts,  Italian and European premieres... an unforgettable event!

Help us in fundraising the screenings: be a donator!

IMMAGINARIA in MILANO at the second edition of the LESBIANS OUTHALL 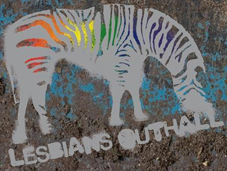 At the LESBIAN OUTHALL this year IMMAGINARIA presents all Italian premieres: documentaries, featires and shorts... an unforgettable event!

Friday the  29th of September 2012 at 8.00 p.m., in the wonderful location of  Palazzo Morando in Milano, few steps from the city's heart Piazza San Babila IMMAGINARIA presents "Margarita", the amazing feature directed by  Dominique Cardona and Laurie Colbert. 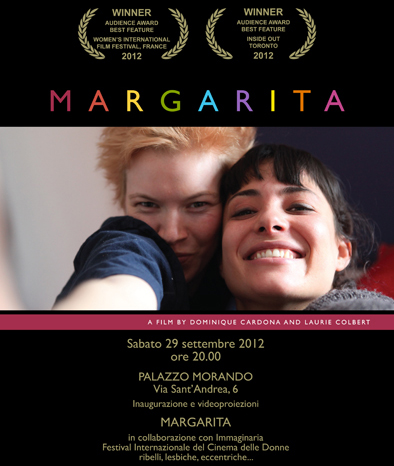 IMMAGINARIA at the LESBIANS OUTHALL in MILANO

Meeting people bringing the lesbian culture in the major locations of the downtown!

FUORISALONE DELLE LESBICHE
The Lesbian' city is everyone city!

Friday the 30th of September , IMMAGINARIA proposes  an  italian premiere and a lesbian-feminist selection of new shorts and features.

Look at the LESBIANS OUTHALL WEB SITE to have a complete view of the program. 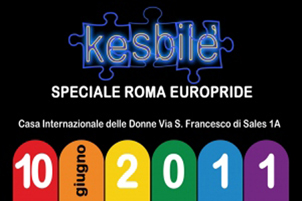 "Once upon a time Immaginaria", Festival pills in MILANO

in collaboration with Soggettività Lesbica

Thanks to several Italian groups and associations, on the 21 of July 2006 the great IMMAGINARIA TOUR begins to meet, have a confrontation and look together at the best shorts screened at the last two IMMAGINARIA Editions.

Here there are the confirmed dates:

We have big economical troubles: take part in our Tour to help the feasibility of the Thirteenth Edition!

On the 21st of May 2005, IMMAGINARIA takes part in the congress "Lesbian life between reality, imaginary, representations" organized by Soggettività Lesbica. The speech "Rebels, lesbians, eccentrics. All sane women" by some IMMAGINARIA organizers will take place in MILAN at 2.30 p.m. at the "LIBERA UNIVERSITA' DELLE DONNE - address: Corso di Porta Nuova 32" (visit this site for the congress program  but pay attention to the changed address)

From the 17th to the 20th of November 2005, don't miss the new IMMAGINARIA edition, the wonderful, unique, inimitable International Women's Film Festival!

In 2004 Immaginaria was not inactive. Although forced to give up the usual annual appointment due to economical, logistics, and "institutional" troubles, "she" has not surrendered to the difficulties and she has worked in the background experimenting new channels to give continuity to "her" history. She reinforced her international contacts; she developed the collaboration with continental and overseas distribution houses; she worked out important projects earning the interest of the local institutions from which it is expected they translate in practice a partnership which could be profitable for both, including IMMAGINARIA in the permanent events of Bologna so that IMMAGINARIA could have plenty of bearableness as never she has been. Therefore, we are working with both some more hopes and a cautious optimism so that, if the promises will be kept, the twefth edition of the Festival will take place from the 17th to 20th of November 2005 and the thirteenth will take back its place on February 2006.  Kept in a lot of women's memories, the Festival introduce itself with a new visiting card which specifies its contents and gives back the visibility also to its feminist gaze and to figures and themes which were not ever disregarded. The Festival, pursueing its "Different gender objectives", starting from the twelfth edition will be named "IMMAGINARIA - International Women's Film Festival. REBELS, LESBIANS, ECCENTRICS".

COME AT THE NATIONAL "FESTA DELL'UNITA'"

Do not miss the events organized by VISIBILIA at the National "Festa dell'Unità", the biggest left party happening in Italy (Bologna, 28 of August - 22 of September 2003).